Joe Wicks on loving being a new dad, improving as a cook and why he’ll never count calories

The Body Coach is back – this time with a batch of 30-minute recipes. He talks to Lauren Taylor about life lately and what the new book is all about.

As bestselling cookbook authors go, Joe Wicks is a bit of an anomaly. He’s not had any professional chef training, never even worked in a kitchen – and in fact only learned how to cook a steak medium-rare a couple of years ago.

Yet he’s just released his sixth recipe collection, Joe’s 30-Minute Meals, and has the UK’s second bestselling cookbook in history under his belt (Jamie Oliver holds the top spot), overtaking many Michelin-starred and celebrity TV chefs.

So how has he done it? A thoroughly modern star, Wicks built his – now multi-million-pound – empire through social media, posting short videos of himself working out, or throwing his healthy dinners together. His chirpy personality, along with his trademark style of shouting the ingredients as he throws them in, has helped the PT with gravity defying curls gain an audience of 2.3 million on Instagram as The Body Coach.

Wicks’ latest book sees him move from ‘Lean in 15’ – the concept that catapulted him to the top of bestseller lists – to meals that take double that time but are still quick and easy, and show off what he says is the evolution of his own learnings in the kitchen. “I’ve kind of progressed a bit as a cook [he won’t call himself a chef] and I wanted to introduce recipes I’m enjoying now, things I’d have never cooked once,” he says. “I used to think risotto was the hardest thing on earth to cook.”

That’s perhaps what’s so charming, he’s no Raymond Blanc and isn’t trying to be. Wicks was brought up on frozen chicken
nuggets and fish fingers and it wasn’t until his 20s that he got into cooking, alongside his love of fitness. “Once I started to cook healthy food, I realised how good it made me feel,” he says – and even now, he’s still picking up new skills. “I’m learning to use new spices and flavours but keeping it all simple, so I still believe, every recipe in here, everyone can do.”

On being a dad
Wicks and his girlfriend, model Rosie Jones, welcomed their daughter Indie in July. “She’s just the cutest thing in the world, I can’t wait to go home and see her,” he gushes. “She’s been a joy – even if she wakes up in the night she makes the cutest sounds. Of course, healthy living will be part of family life: “Indie watches me cook now. She’s around it, so she’ll learn this is what we do – we cook and we exercise.”

Speed and ease
He describes his latest book as “a bit more grown-up”, written with whole households in mind. The 30-minute meal concept has, of course, been done before, most famously by Jamie Oliver (one of Wicks’ food heroes and now friend) – but fast, easy healthy meals was a trend Wicks helped grow in the online world, when Instagram first took off. “There was never a strategy, I just realised people wanted speed, and quick and fun, so I made it simple because I was learning as I went.

“My first recipes were so bad,” he admits – although he puts his success down the fact he’s just “an average guy cooking simple, fun recipes that are quick”. Not that success came overnight, and he acknowledges he captured his audience at just the right moment. “It’s taken years of [building] trust and giving out all this content. If I started today with my Instagram, with the same idea, exactly the same personality, I would have nowhere near the success I’ve had,” he reflects. “I had a good idea, at the right time.”

The carb factor
The new book is split into sections: All-day breakfast, chicken, fish and seafood, pork, beef and lamb, and sweet treats, and includes recipes you might not expect in a ‘healthy cookbook’, like ‘banging’ chicken balti and sausage and mushroom pie.

Each recipe is marked either ‘reduced-carb’ (higher in fat and protein) or ‘carb refuel’ (lower in fat, higher in carbs), a concept Wicks fans will be familiar with. The idea is that you eat the former on days when you do less activity, and the latter after a workout: “Your muscles enjoy that refuel process.”

But Wicks isn’t militant about it. “You could have carbs every day with all your meals, as long as you’re in a slight energy deficit and you’re burning more than you’re consuming.”

More importantly though, it feels as if he’s genuinely on a mission to inspire people to simply cook more, move more, and have a good relationship with food – one that doesn’t involve counting calories.

Forget calories
“My biggest criticism from anyone – I always get stick from personal trainers – is always the fact that I don’t list calories and macros [macronutrients]. I’ll always stand by it – I don’t believe in calorie counting. I don’t think it’s a healthy relationship to have with food.

“Back in the day, before we understood what calories were, we were fine! We ate intuitively, we exercised,” he adds. “Weighing yourself every day and counting calories… You can’t hit a daily target – your body doesn’t work like that.

“People like realistic, they like having a treat and not feeling bad. If you ate a little bit more food today, that’s fine – get up and have a workout, and be a bit more sensible tomorrow. There’s no perfect day.”

Exercise Body Coach-style
Ease and speed is Wicks’ mantra when it comes to exercise too, his advice is to do four or five quick workouts a week (he prefers to train fasted in the morning), and on YouTube you’ll find hundreds of his 20-25 minute HIIT (high-intensity interval training) workouts, often without the need for any equipment or even a basic level of fitness.

“I believe in home workouts and home cooking,” he says. “You can join a gym, pay £100 a month or get a trainer, it’ll motivate you for a little while but it ain’t going to help you when it’s freezing cold and it’s snowing and you don’t want to leave the house.”

In a world of clean eating, meal replacement shakes and keto diets, it’s simple, sensible stuff – and it’s that kind of straight-talking that got me doing a Wicks HIIT workout later that day, after our interview, in front of the telly.

PICTURED ABOVE: The Body Coach Joe Wicks in his kitchen | PA Photo/Conor McDonnell

Feeling inspired? Try a couple of Joe’s recipes for yourself… 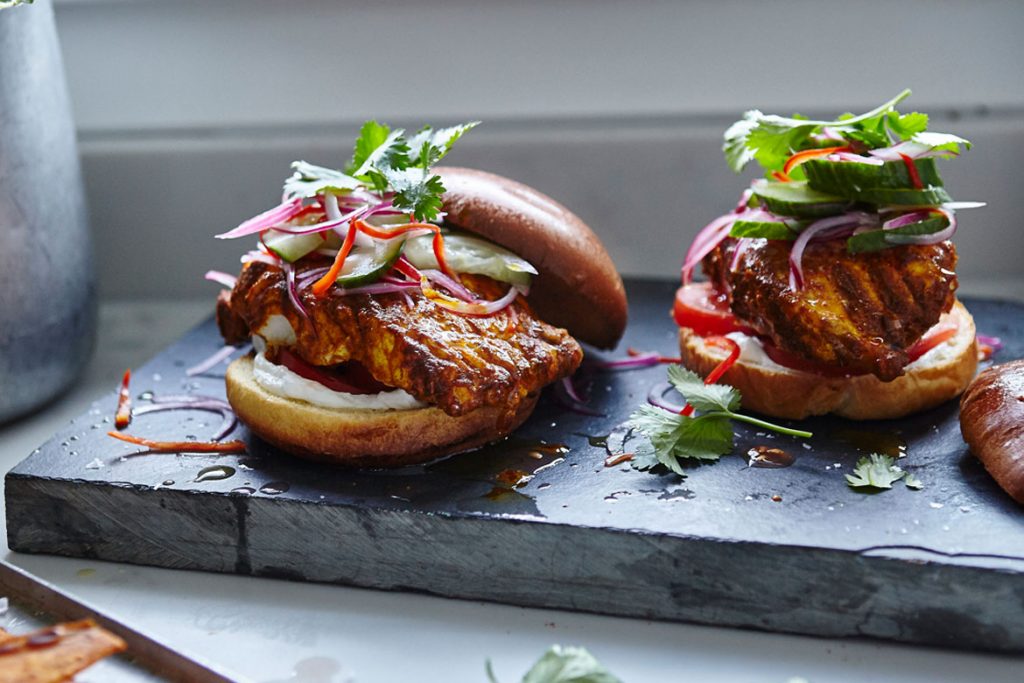 Method:
Cut each sweet potato in half lengthways, then cut into eight long, thin wedges and scatter over one layer on a baking tray.

Drizzle over the olive oil along with a good pinch of salt, toss to mix then roast in the oven for 25 minutes.

Mix together the rice vinegar, sugar, red chilli, onion and cucumber in a small bowl and leave to steep, giving it a mix every now and then.

Coat the cod fillets in the curry paste then place onto a baking tray lined with parchment and roast in the oven for 15 minutes, by which time they should be just cooked through. When the fish has only five minutes to go, cut the buns in half and place in the oven to toast.

To build the burger, spread a little yoghurt onto two bun halves, load up with sliced tomato, lay the fish on top then scatter the cucumber mix over (drain off the excess vinegar). Finish with the coriander and squash the remaining bun halves on top.

Serve with the sweet potato fries. 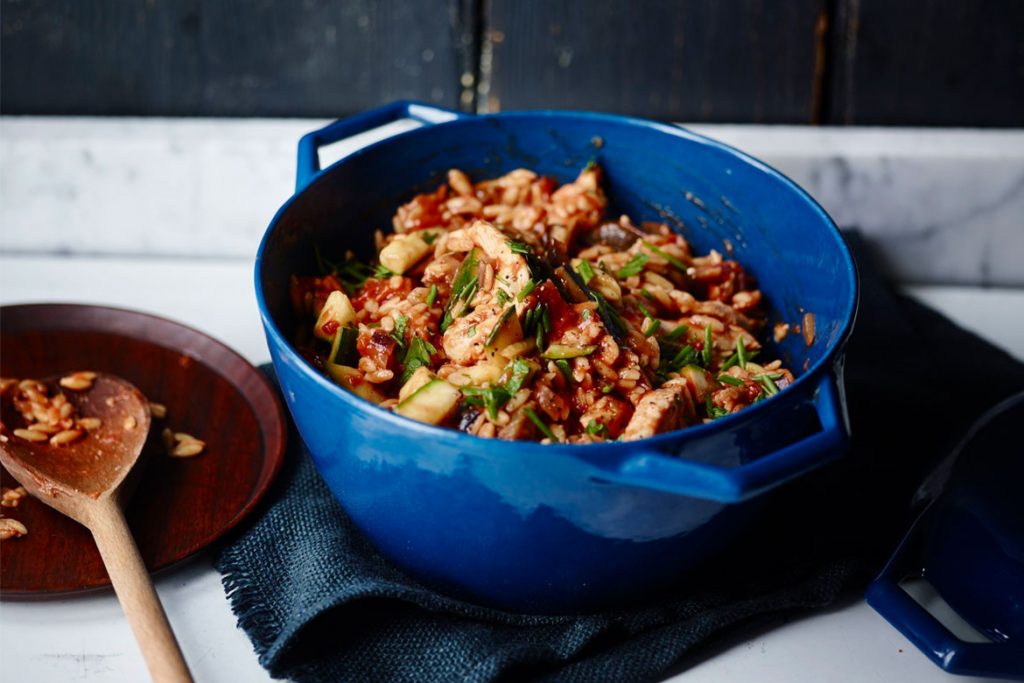 Method:
Preheat the oven to 200°C (fan 180°C/gas mark 6). Melt half of the oil in a heavy-based flameproof casserole dish over a medium to high heat. Add the onion and cook for one minute, then throw in the courgette, aubergine, oregano, thyme and two chopped garlic cloves. Fry, stirring regularly for five minutes, until the vegetables are starting to soften.

Add the tomato puree and orzo and mix to combine. Pour in the chopped tomatoes and chicken stock and bring the mixture quickly to the boil, stirring regularly. Put the lid on and slide the dish into the oven.

Meanwhile, melt the remaining oil in a large frying pan over a high heat. Add the sliced chicken and the remaining chopped garlic clove. Stir-fry the chicken so that it is virtually cooked through – it is more important at this stage to colour the meat than to cook it through. Sprinkle in the paprika along with a pinch of salt and pepper and toss the whole lot together.

Remove the pasta from the oven and carefully take off the lid, stir in the chicken, slide the lid back on and bake the whole lot together for 10 more minutes.

After 10 minutes, take the dish from the oven and stir through the parsley and chives. Serve straight from the dish to the masses.